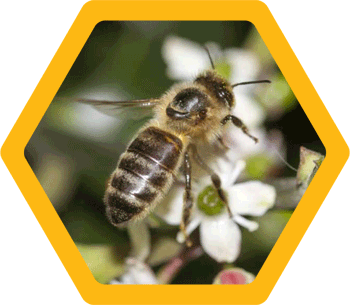 There is just one species of honey bee in the UK – it is slim, with a black abdomen and golden-amber bands. Domesticated for centuries, our honey bees mostly live in hives and are commonly found feeding on open flowers. A honey bee colony will continue to grow each year. The average size of a honey bee colony in the summer is around 50,000 bees, which has the potential to produce around six litres of honey!

Honey bees play an essential part in maintaining our environment and the whole planet. Bees are vital to pollinate the food we need to survive and also many of the trees and flowers that provide habitats for our wildlife. It has been estimated that it would cost farmers in the UK an incredible £1.8 billion per year to manually pollinate their crops. 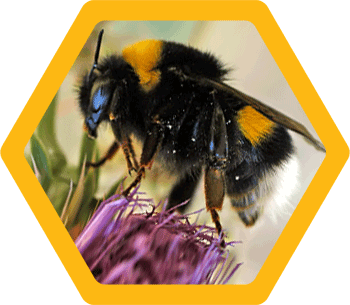 Whether they’re white-tailed, red-tailed or ginger bodied, Bumble bees aren’t easily confused with any other bee. Bigger and furrier than honey bees, Bumble bees are social insects and live in a colony with a queen and her offspring (the workers).

New nests are created by queens every year in spring, which are usually located underground in abandoned burrows, bird boxes, under decking or in compost bins.

You will often see the larger queens feeding on flowers from February onwards or flying low over the ground to search for a nesting site. 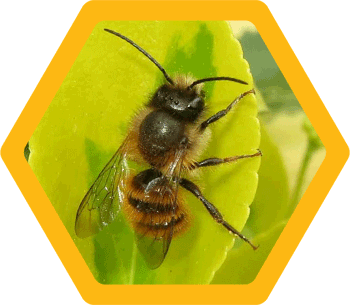 Masonry or Mortar bees often burrow into mortar joints or crevices in brick or stone walls. They are solitary insects, unlike honey bees. With their reddish-brown bottom and black body, you’re most likely to see them flying in and out of walls or small holes in the ground. They make their nests in wall cavities and are able to tunnel through soft or damaged brick mortar – they do not cause structural problems.

The female masonry bee burrows into earth and soft rocks to lay her eggs from which new adults appear during the spring.  Only one brood is created per year and you will only see them for just a few weeks. Masonry/Mortar bees are not aggressive and are in fact harmless to humans. After the summer, most of the bees will leave and not return to the same nesting site the following year.

Colonies formed in spring usually decline naturally by late July and as natural pollinators, they are very useful to gardeners and arable farmers. Treatment and eradication is not required for Masonry and Mortar bees. 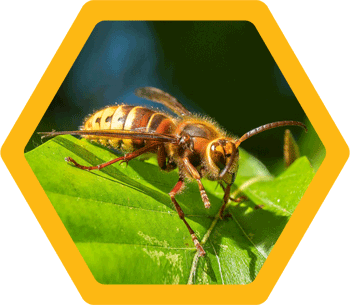 Although less common in the UK, the European hornet can be twice the size of the common wasp (25 to 35mm) and is brown and yellow in colour.

As Britain’s largest social wasp, the hornet queen begins to build a nest in spring and lays eggs within the paper cells. Once her new ‘workers’ emerge, they take over the care of the nest which reaches its peak size towards mid September.

Despite its fearsome reputation, the hornet is rarely aggressive unless the colony is threatened. However, they can bite and sting at the same time and also mobilise their whole colony to sting an intruder, which can cause a danger to humans. Especially as a hornet colony can grow to up to 700 workers.

Hornet nests can be found in trees, bushes, buildings, barns, attics and walls. 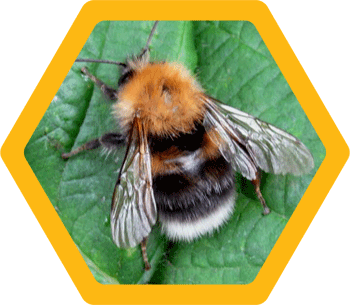 Tree bees have a ginger body, black abdomen and white tail and live in colonies, which can form up to a few hundred bees. Nests can often be found in dry, dark holes underground or under sheds but they also can nest in lofts, bird boxes and trees.

Tree bees are most likely to be seen from March until July but sometimes occur later in the year. 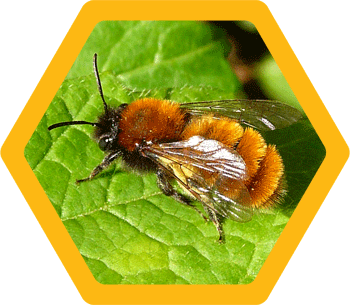 The same size as a honey bee, the tawny mining bee is a ginger species with a thick orange coat and a black face. It enjoys feeding on shrubs, fruit trees and dandelions and is found in a wide variety of habitats.

You may find Tawny Mining bees in gardens or parks and in areas where there are light soils or bare banks. 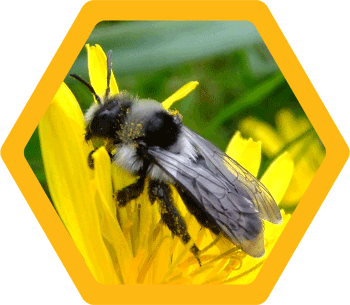 The Ashy Mining bee is distinctive due to its black and grey colouring. It can be found in a variety of environments including heathland, moorland edges, open woodland, coastal grassland, cliffs and quarries. Its diet includes willow, blackthorn, gorse, buttercups and fruit trees.

Mining bees are not aggressive and will only sting when defending their eggs. 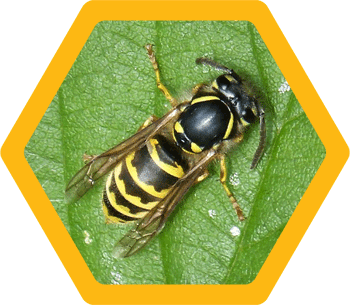 Here in the UK, wasps are mainly classed as Common or German wasps. Both are yellow and black striped and are known for their painful stings which can cause allergic and sometimes dangerous reactions.

Queen wasps emerge and start working on new nests in the Spring. By the Summer, wasp nests are busy with up to 300 eggs being produced every day. Often seen as an aggressive insect, the wasp will only attack when threatened but it tends to emit a distress pheromone which can make other members of its colony highly defensive and more prone to sting. 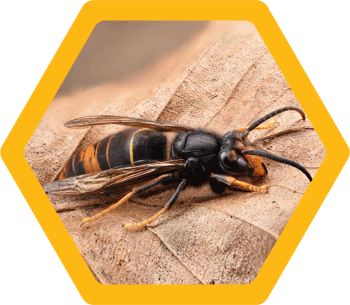 A predatory and invasive insect, the Asian Hornet has been seen in Britain since 2016 and poses a threat to our native wildlife, especially honeybees. Hornets are the largest social wasp and are usually active between April and November, with a peak in August and September. Asian hornet queens reach up to 3cm in length and her workers are around 2.5cm long.

As an invasive species, Asian hornet nests that have been found in Britain have been destroyed. The Department for Environment, Food and Rural Affairs (DEFRA) is trying to prevent a nationwide Asian hornet invasion, currently through eradication of individuals and nests. If anyone thinks they have seen one, it should be reported to DEFRA or they can report it to us and we will do it for them.

Telephoning about what we thought were wasps, Louise was able to come out the same day. She soon realised they were honey bees and was able to phone a bee keeper out the same day as well. He took a look and was able to give further advice on removal. Excellent service and highly knowledgeable. I would highly recommend to anyone.
Ross SNorwich
“I needed help and advice regarding bees inside our house/wall. After contacting many others who were no use at all, I got in touch with Louise at Buzz-Off. She was not only responsive and friendly but extremely knowledgeable and helpful. She put our mind at ease with some useful advice and came around as soon as she could to provide help. Great communication and service, Could not recommend highly enough. 5 star review from us!
Mike CurrumsNorwich

How can we help you?