It’s been a busy first summer for the team at Buzz Off Honey Bee, as we set out to locate and save live honey bees from a variety of locations across East Anglia.

A problem with honey bees is that swarms can set up home in chimneys, roofs, wall cavities and trees. It’s a natural occurrence for honey bees to swarm on a warm day (usually between May and July) but it can be much earlier depending on the weather. In 2020 for example we saw swarms moving in March, due to the mild weather. Honey bees swarm when they decide to create a new colony and can be problematic if they choose to take up residence within the structure of building. Issues can be identified as:

When we have removed them live from buildings, they are rehomed in a field and are thereafter looked after by a local bee keeper.

Removing live honey bees and any honey comb from a building or property is not easy and requires a high level of skill to achieve. Our team of experts have been on hand to answer calls from worried customers who have found honey bees in chimneys, walls and even a bedroom! Here are some of the projects we’ve undertaken this summer:

Bees removed from a chimney in Newton Flotman, Norfolk
Our customer had previously been awoken in the middle of the night when bees had swarmed in her bedroom! Although the bees had left the building, 3 years later another swarm arrived. They didn’t stay but the old honeycomb is a ready made home for a new colony to move into (the customer decided to have the chimney removed in this instance as it was redundant).

Bees removed from a dormer roof space in Hethel, Norfolk
The honey bees had gained entry to a dormer roof space and had been in-situ for 3 years. This was a complex job involving a swarm of about 85,000 aggressive Italian bees. The customers reported that when we had completed the works that they hadn’t realised quite how noisy the buzzing bees had become but that they were now sleeping very soundly. We have also been able to set up some hives on their land so they can now enjoy their own honey for breakfast!

Bees removed from a flat roof space in Clenchwarton, Norfolk
Our lovely customer had called us just as the bees were moving in. Following a survey, we decided that as well as removing the honey bees live, we would need to replace the fascia, guttering and flat roof.

Honey Bees removed from a cavity wall in Hethersett, Norwich
The bees had moved into the cavity on the front elevation of the property due to a design flaw in the building. Once we safely removed them, our building repairs looked like the bees had never been there!

Bees removed from a cavity wall in Ely, Cambridgeshire
The bees had moved into a cavity wall in the side elevation of the property where a weep vent had not been fitted by the building company. The customer was very lucky that the comb had just started to be built around the corner of the property – had he left it longer, the course of action would be to remove the end part of the roof as the corner is a supporting structure. The customer can now proceed with his house sale and our works guarantee is transferable to the new owner.

Honey bees removed at Hapton Chapel in Hapton, in the soffit of the building were featured in a beautiful film we are making about the importance of honey bees. We started work at 6am as the temperatures reached 35 degrees later that day, which was scorchio in the bee suits. It was fascinating watching the bees from far and wide come to rob the spilt honey on the scaffolding. We sat and ate lunch while they cleaned the decks for us.

View our customer case studies including photographs and videos at:
https://www.buzz-off.co.uk/honey-bee-removal-gallery/

Commenting on their very busy and successful first summer, Louise Chapman from Buzz Off Honey Bee said: “I have been delighted with the progress of the business in our first year and I felt an enormous sense of satisfaction to be a part of saving colonies of endangered honey bees which are critical for our environment. Observing our customers’ sense of relief and also pleasure that they had done the right thing by employing our services to remove the bees live, rather than having them destroyed was also very satisfying.”

Remember: It is vital for us to take care in the removal of bees as the honeycomb is a human food source and any contamination by pesticides or insecticides can have severe consequences. The incorrect removal or illegal treatment of a honeycomb could result in a fine of up to £25,000. 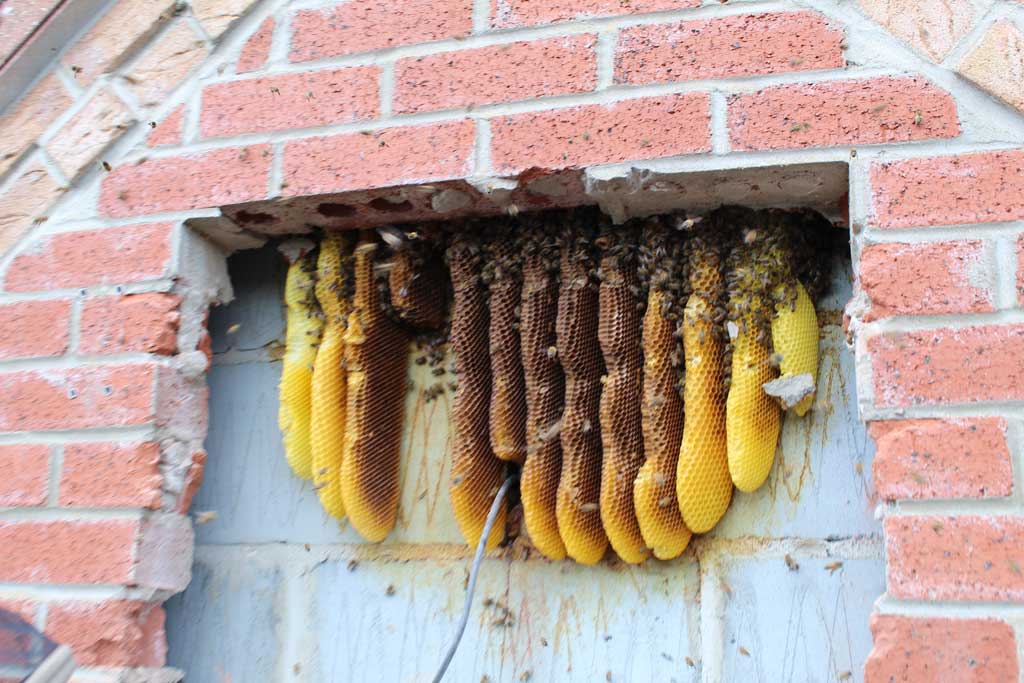 Telephoning about what we thought were wasps, Louise was able to come out the same day. She soon realised they were honey bees and was able to phone a bee keeper out the same day as well. He took a look and was able to give further advice on removal. Excellent service and highly knowledgeable. I would highly recommend to anyone.
Ross SNorwich
“I needed help and advice regarding bees inside our house/wall. After contacting many others who were no use at all, I got in touch with Louise at Buzz-Off. She was not only responsive and friendly but extremely knowledgeable and helpful. She put our mind at ease with some useful advice and came around as soon as she could to provide help. Great communication and service, Could not recommend highly enough. 5 star review from us!
Mike CurrumsNorwich

How can we help you?